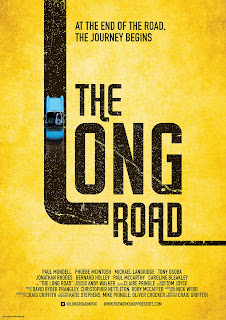 I hope you’re all well. Here we are again with an update.

Not much to report this time but I did promised I’d be updating more regularly.

I am currently putting a release schedule together and I am planning to put the film out through Amazon as I did with Through The Looking Glass.

I found that putting the film out this way meant that the film had a more considered release and a longer shelf life as a result. It meant we could build reviews and audience as opposed to needing to have a big weekend release which realistically the film wouldn’t have got. It’s such a competitive market and if you don’t have the full might of an advertising campaign that a traditional distributor offers then you’ve no chance. This way we have been able to build word of mouth.

If I’d put the film out through traditional distribution routes then it would’ve been a small release and the film would have played for a few weeks and then disappeared.

Having done it the way I’ve done it I’ve retained rights and have just finalised a release deal with a new distributor - 11 years after I first released the film. That is an amazing life for a film. However the down side is I have had to work harder, there had been less of a publicity push than a larger distributor would have provided and the money doesn’t come as regularly as it might.

I have found this method suits the way I work and I fully intend to build on this for the release of The Long Road.

I am looking to release the film early in the new year and will be chasing up deals for VOD and TV releases through other distributors later in the year.

At some point I will also be organising a screening and will let you know closer to the time. It would be amazing to see you there.

Until next time
May the road rise with you.


Craig
Posted by WorkshopCraig at 09:28